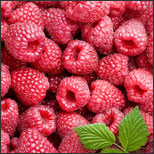 Have you ever tasted raspberries that were grown in someone’s backyard?

This Friday is a great one because it is in the middle of a holiday weekend. From all of us at Rootwell Products Inc., we hope you had a happy 4th of July.

Yesterday, I was sitting at my grandfather’s house with all of my family. Everyone had gathered for the 4th of July celebrations. Many of us were feeling nostalgic. My grandfather’s home was purchased over 55 years ago and is filled with a life time of memories.

One tradition that I was only introduced to yesterday was raspberry picking. Now when my grandfather bought his house it was in the country on a dirt road. Today, his home is in one of the hottest real estate places to own in metro Detroit area. Almost the entire country feel is lost – all accept the raspberries.

Behind his house are railroad tracks. Now back in the late 50s and 60s there were raspberry bushes that grew along the railroad tracks. My parents and their siblings would walk down and pick raspberries. It became great memory for everyone.

My grandfather tried to transfer a raspberry bush to his home with no luck. The bush never survived the transfer.

Yesterday sometime after dinner, my uncle took his son and a few of my cousins to go and pick raspberries. They came back very victorious.

It looked like the raspberries had yet to reach maturity, but they still tasted amazing. They stained my fingers while I ate them, but it was well worth it.

It got me thinking though, why didn’t this raspberry bush survive in my grandfather’s backyard? He is an experienced gardener and is the one who inspired my love for gardening.

The raspberry bushes are obviously tough if it can grow alongside a railroad track for over 50 years and that was only when my family arrived – we don’t know the actual life of the bushes.

I’ve decided that it must be the roots. They must be so deep and so strong that they can withstand anything. My grandfather just didn’t have the right tools for the transferred bush to withstand the transfer.

Luckily, today, we do have the tools. If my grandfather had access to Rootsticks back then, we would probably had enjoy raspberries every year from his own backyard.

Rootsticks are a direct to root watering system that is scientifically proven to increase root growth and even increasing the mass of the plant.

50 plus years later, the raspberry bushes along the railroad tracks are still producing raspberries for everyone’s enjoyment. I hope you have a wonderful rest of your weekend and we’ll see you back here on Monday.