The term Mid-century Modern has become a buzzword in popular design. But did you know that term wasn’t even around until the 1980s? Long after the period in question was over?

It came about when author Cara Greenberg made it up as the title for her 1984 book Mid-century Modern: Furniture of the 1950s. Now, you can find whole houses, dining sets, couches, furniture store sections and, you guessed it, plants labeled with that term.

It does get a little silly since the plants in question have been around for millennia and the furniture at West Elm is reproduction furniture, not vintage.

Still, it’s a catchy phrase used to describe a certain aesthetic which ruled in the years after World War II when soldiers were coming home, the economy was booming, and lots of new homes had to be built fast.

The Era of Suburbia

It is the era of suburbia, gas guzzling cars, attached garages, thick-framed glasses, and Eames chairs (some of which have never gone out of production: just fly in or out of Chicago’s O’Hare airport to see an iconic chair).

To see an example, watch the popular 1980s show “The Wonder Years” (to name a previous era in which 1950s and 60s design was making a comeback) or the more recent “Mad Men.”

Somehow, in that new mass-produced world of plastic, designers who were cutting corners to make construction faster managed to also make this type of design into a new classic.

Lasting from roughly the mid-1930s to mid-1960s, all types of mid-century modern design – which encompasses architecture, furniture, and graphic design – have a few things in common: clean lines, organic curves, minimal ornamentation, mixed materials, and functionality.

Contrasted with earlier period design – like a Victorian house, which is basically a tall box with a bunch of ornamentation – the homes and furniture of mid-century modern design has the opposite effect. The architecture of a piece is often its appeal, rather than any ornamentation added after the fact.

Which is why there were, and are certain houseplants which lend themselves to mid-century style. The practice of keeping houseplants was not new. However, that era, like this one, homeowners and designers alike graduated from formal atriums and stuffy plant stands to casual arrangements of plants that had an architectural appeal.

Modern heated homes were also the ideal place to keep alive plants which could formerly only survive in warm climates. These three plants are not the only plants kept by 50s and 60s era homeowners. They are very popular today because of their fascinating forms and ease of upkeep. Plus they will look great with your mid-century furniture.

The Sansevieria is an obvious first choice. These guys are easy to care for container plants. They have tons of visual interest and a very architectural shape. Watch out: the thick, strong rhizomes have been known to break pots. Make sure you give your snake plant a good home.

Of the sansevieria species, Sansevieria Trifasciata is the most common. It is the one most commonly called the Snake Plant. It has the horizontal bands of dark and light green. The variety Laurentii has yellow edges.

However, there are many other cultivars out there now. This wasn’t the case 20 some-odd years ago when famous Brazilian garden designer Burle Marx began using them.

Back then, there were only three types. Originally, they were brought from Africa to Europe in the 19th century, to delight Victorians along the Mediterranean. Because they are so effortless to grow and give a cutting to one’s neighbor, everyone had a snake plant in the 50s and 60s.

Not only do snake plants almost guarantee a feeling of success in growing something green, they have also been named in a NASA study as one of the best for cleansing indoor air of toxins.

Another popular and iconic mid-century plant is the Monstera deliciosa plant, also called the split leaf philodendron or Swiss cheese plant. You will know a monstera by its huge, broad leaves which have holes in them.

There’s another plant sometimes mistaken as a split leaf philodendron: a tree philodendron.

They are often mistaken because the leaves are similar to the monster plant. However, they don’t have actual holes like a monstera. They have long, deep lobes but if you look closely, they aren’t connected or webbed at the edges like a monstera.

Of course, there’s no inherent problem with the tree philodendron plant. They do, after all, have large, glossy leaves and are architectural enough to satisfy the most discerning mid-century aficionado.

However, they are not the same. Monstera are climbing plants. They will actually overtake your whole garden if you’re lucky enough to live in a place where you can plant them outside.

Philodendron is an upright shrub. Indoors, you are not very likely to notice that particular difference. If you want to see a Monstera living up to its potential you can either go to the jungle regions of Central America (where you may also be able to see and taste its fruit).

You can also visit the Belle Isle Conservatory, where a huge Monstera plant has climbed almost all the way to the top of the 30-foot palm tree in the middle of the conservatory’s central atrium.

You can’t spend a minute on Pinterest these days without finding a sleek photo of a well-styled mid-century apartment with a Ficus Lyrata in the corner. It may not have been a well-known plant back then, but it is certainly the “it” plant of the moment.

Well, fiddle leaf figs are photogenic. The spindly stems and bush of huge, glossy leaves are perfect to liven up a dead corner. The negative space, the way the sun catches in the leaves. It’s a beautiful plant.

That’s probably why French luxury brand Celine has adopted it as “the” plant of the brand – unofficially. And, according to the New York Times, so has Marimekko at its headquarters in Finland, and the Casper Mattress brand in its first-ever store.

But it is also a fussy plant.

Fiddle leaf fig plants are often touted as being easy to care for. This may be true if you happen to bring one home on a 70-degree day and put it in the perfect, non-drafty, brightly but indirectly lit corner away from radiators. Oh, and don’t move it.

But seriously, this plant is worth the upkeep for so many reasons. Did I mention the delicate stem and romantic leaves? Did I mention how they’re everywhere in photographs?

Keep a few things in mind if you desperately want to join the fiddle leaf fig club:

If you love mid-century modern design, these trendy and beautiful plants are the perfect accessories. 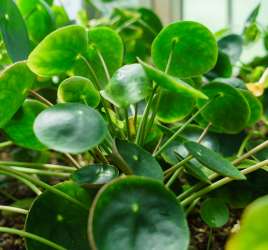 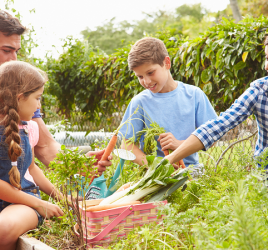