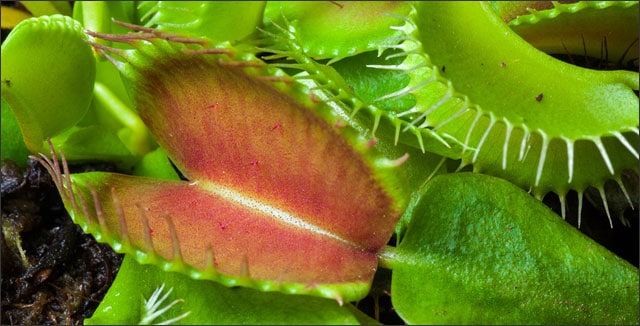 The other day I saw a whole rack of Venus Flytraps – Dionaea muscipula – for sale at Aldi, of all places. I didn’t know anything about these plants other than what I had seen as a kid on a nature show, so it was all kind of fuzzy.

I was under the impression they were an endangered species, or especially rare. It was a huge surprise to see them for sale at the wholesale grocery chain. So, I snapped one up.

I briefly read the instructions printed on the plastic container the plant was in: “do not feed the plant meat” and took it home to investigate its interesting properties. This is the season for bugs in our house, so there were several on-hand.

All I needed was a pair of tweezers to hold the bug and that plant totally lived up to its reputation. The trap leaf snapped shut on that elder beetle like it had springs. It was amazing.

Do you know that scientists still don’t have any idea what makes the Venus Flytrap leaves spring shut like that? Read on!

The other thing I didn’t know about Venus Flytraps is that they are native to the United States and not the cool rainforest areas on the West Coast like I had thought. They live in the bogs of North and South Carolina!

Venus Flytraps did become endangered in the wild because of how popular they became, causing many people to collect them from the wild. Today you can find a Venus Flytrap in a greenhouse more easily than you could find one in the wild.

There are other carnivorous plants all over the world. This top-ten list reads like a potions recipe from Harry Potter:

There are actually many more carnivorous plants in the world. These plants simply represent several of the mechanisms by which plants trap and catch insects for food. 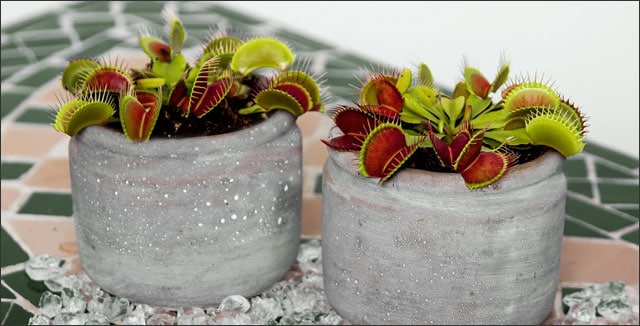 Fascinating Mechanisms of the Venus Flytrap

The Venus Flytrap has one of the most fascinating mechanisms. The trap is the true leaf of the plant. Dionaea muscipula will send up a tall stalk and grow a flower high above the fly-trapping leaves below.

They can reproduce via the tiny seeds the flowers produce or via a rhizome. Venus Flytraps never have more than seven shoots. If you have one with more than seven, part of the plant has already split off from the mother plant.

Inside the leaves of the plant, there are short, stiff hairs – trigger hairs. Venus Flytraps can actually tell whether it has caught live prey and only closes on a struggling live victim.

If you are growing one of these beauties at home and feeding it something other than live bugs you have to ever so carefully trigger its mechanism using a little toothpick when you put the food in its leaf. But don’t do it just for kicks. It wastes the plant’s precious energy to spring its trap, so to speak.

After its trap closes, the leaf will be open a small crack. Scientists think this might be in order to let smaller insects out because they won’t provide enough nutrients for the plant.

If a non-food item triggers the trap, the Venus Flytrap will “spit” it out after about 12 hours. A few minutes after the initial spring, the trap seals itself shut. It literally forms an air-tight seal. This is now its stomach.

How the Venus Flytrap Digests

Digestive juices similar to those in our own stomachs are released and this seal also keeps bacteria out. The inside of the insect will be digested, leaving the exoskeleton intact. In about 12 days, the stomach acids recede back into the plant and the leaf opens and the remains of the insect are left to fall out or be washed away by rain.

This air-tight seal is very important. If the flytrap catches – or is fed – a bug that is too big, whose wings, antenna or legs are sticking out, it can’t seal. The liquid slowly digesting the bug also purifies it and keeps the bacteria it carries from harming the plant. This is much like our own digestive system. But mess with that seal and the bacteria will get in and kill the trap. It will blacken, rot and fall off.

Venus Flytraps have no nervous system, muscles or tendons. The theory on this spring-like mechanism is that fluid pressure activated by an electrical current cause the traps to close.

Caring For Your Venus Flytrap

First off, Venus Flytraps can be submerged in water for weeks and not die. They are bog plants. You can’t water this thing too much. You can kill it by not watering it enough, however.

They also need high humidity. This can be supplied by the water in the bottom of the planter. However, it can also be supplied by putting it in a terrarium or being kept partially covered by glass. Just don’t cover it all the way and make sure it’s not getting too much sun.

Two hours of the sun per day will do just fine. Keep track of how hot it gets inside that glass container. Remember, those things heat up in the sunlight.

Venus Flytraps have adapted over time to poor nutrient soils. One of the directions on my little guy’s packaging was to fertilize it. This was dead wrong.

If you have your Venus Flytrap in regular potting soil or have fertilized it, take it out immediately, keep the roots in a glass of distilled water and go buy some soil mixture with sphagnum moss and sand. Do not add fertilizer. You will over mineralize that poor plant.

It eats bugs for a reason: to make up for the nitrogen lacking in the soil to which it has adapted. So, starve it from the bottom and feed it from the top.

What to Feed Your Venus Flytrap 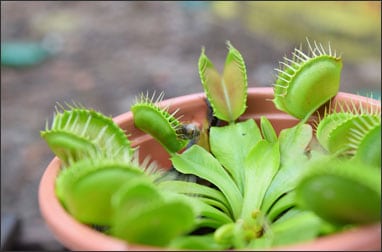 Yes, you can tweezer-feed your little buddy a bug, but pick one that is ⅓ the size of the trap you are feeding it to. If you overfeed it, you will kill the trap or possibly the whole plant. Some other ideas that have worked well for others are:

Keep in mind that the trap will have to be gently triggered in order to get it to close around the inert food. If you have beetles and spiders crawling around your house, your plant might just feed itself. The best part of owning one is watching this happen.

Venus Flytraps will also go through a dormant period from around Thanksgiving to Valentine’s Day, so don’t be alarmed if there’s a lot of die off during this time.

Hopefully, you will use your newfound knowledge to nurture a little bug-eating plant at your own house. From watering a Venus Flytrap and nutritional needs to what to feed them, you will be prepared to take care of this mysterious plant.