Green Roofs: A Garden on Your Roof 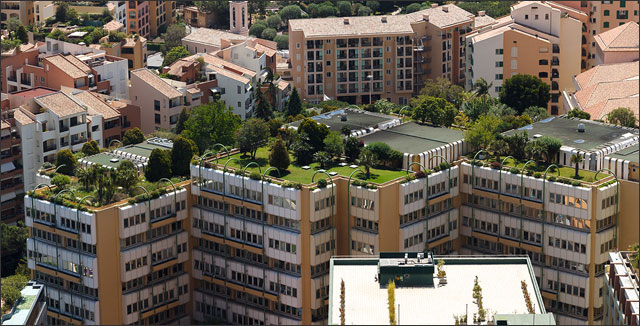 Did you know that green roofs have been around for a long time? In some parts of the world they are making a comeback.

The Hanging Gardens of Babylon – which was one of the 7 wonders of the ancient world – was a terraced garden structure outside of modern-day Baghdad that used a complicated irrigation system.

Germany has become a green leader in Europe with green policies including green roofs. European homes have used sod as a roofing material for a long time for its benefits in helping to heat and cool a home.

In this United States, cities are starting to see the benefits of encouraging business and building owners to plant green roofs. For example, Chicago’s City Hall is a famous example of rooftop gardening. In addition, Chicago has started a citywide green roof initiative to try to do its part to help combat the effects of climate change. 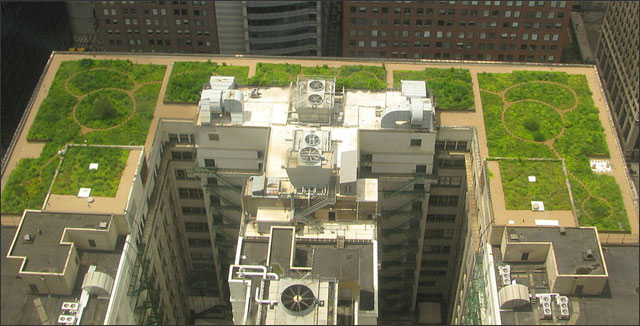 What are Green Roofs?

As you read this, you may think it’s about “green” roofing materials or practices. You know, that catch-phrase used to describe environmentally friendly things?

It actually means having a literal green roof. Like a garden on your roof complete with soil.

First, a waterproof membrane is installed. It has a special material that can protect the roofing material from plant roots. Then, a relatively thin, or thicker layer of sod is installed, and possibly an irrigation system if it’s a large park-like garden like that atop Chicago City Hall.

Now, before you get excited and start pitching dirt onto your asphalt roof, there are a few things you need to know. The main thing is that even City Hall had to be retrofitted to handle the load of all that soil.

Your house will have to be evaluated by a professional and the structure may have to be changed to accept a green roof. It doesn’t work for every existing house or office building. In fact, the load of a green roof can be up to 150 lbs per square foot! That’s a big weight to throw on top of a structure.

There are two types of green roofs:

The Popularity of Green Roofs

The reason green roofs are becoming more popular in Europe and in cities like Chicago is that as cities spread, the amount of green space goes down.

Asphalt and concrete absorb and trap heat, creating a phenomenon called an “Urban Heat Island Effect.” This makes for much higher temperatures in cities. This, in turn, creates the need for increased air conditioning, which pollutes the air and drives up CO2 emissions. The tops of buildings are an unused space, perfect for the addition of green plants. This helps keep the air temperature and surface temperature down.

How Plants Cool the Air

The other amazing thing plants do is cool the air around them by a process called evapotranspiration. When water evaporates from plant leaves, it cools the air as it does so.

If you have a roof planted with green plants, it will stay the same temperature as the air around it. This is not at all like the asphalt, tile, metal or other types of roofing materials we typically use in our buildings, which all hold heat in the same way as a road or sidewalk.

Sometimes roofing materials can reach more than 90 degrees hotter than the air around them. A roof garden would prevent that. It would actually help to cool the heat being created by some of the other building materials used in cities.

Additionally, water is a huge concern in cities and for suburban areas. Toxic runoff and overburdened sewers are always an issue for densely populated areas during rainy seasons. Typically roofing directs water away from structures. However, a green roof has the ability to absorb water and use it rather than sending it down to the sewer.

The plants on a green roof do more, though.

A garden on an unused city building top is a beautiful oasis for people – a break spot for employees, a tourist attraction or a communal and private party space for apartment dwellers.

A green roof can also be an oasis for birds and bugs which would otherwise not have a place to land for many miles. Cities and suburban landscapes have taken their toll on the animal kingdom. Green roofs have the potential to be home for more wildlife. Plants are just good for people. Plants on a green roof can remove particulates from the air and produce oxygen from the CO2-heavy city atmosphere. They can provide rest and shade in the midst of the concrete jungle.

One reason homeowners and building owners may not initially go for a green roof is its cost. If you’re looking at creating an elevated garden, the cost could be enormous if you need to retrofit a building and install irrigation. An extensive green roof could still be $8 per square foot. This is much higher than the $1.25 per square foot that a normal flat roof costs. However, a green roof can protect from wear and tear from UV rays and water damage. It could make your roof last twice as long.

In conclusion, the cost of green roofs might be higher. The buildings we have now may not be as practical for green roof installation. However, the benefits of a green roof can’t be denied. Lower energy bills, habitat for people and animals, and environmental solutions for unused space. Those are all amazing reasons for cities, like Chicago, to start promoting green roofs for all of its citizens.