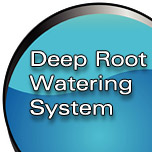 Still wondering if Rootwell Pro318 will benefit your trees and shrubbery?

The University of Arizona recently performed a scientific analysis to investigate the effects of deep root watering system on trees. The study was performed by the Arizona School of Plant Science and was designed by Dr. Ursula Schuch, plant scientist and researcher.

Conclusive results proved that deep root watering had a profound effect on the survival rate of the trees in the controlled environment over a period of 13 months.

The Rootwell Pro318 Deep Root watering system is a root aeration tube that is specifically designed to meet the challenges that growing trees face and promotes root growth. Rootwell’s Pro318 gets water, nutrients and oxygen to the roots of the tree. By providing these three important elements, the trees chance of survival and ability to grow greatly increases.

Interested in learning more about Rootwell?
Visit our website to learn more about our:   deep root watering system.