How Singapore Became the Greenest City in the World 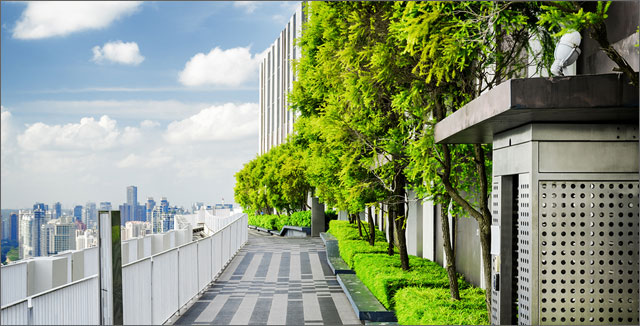 Did you know that Singapore is the greenest city in the world?

It was the enormous man-made trees, covered with growing plants and softly lit in the darkness that caught my attention at the beginning of a “Planet Earth” documentary featuring cities.

Monkeys and insects happily played on the structures while people played underneath. A lush, green expanse unfurled everywhere. However, the backdrop was unmistakably a city.

As the camera pulled away, the shot revealed high rise buildings completely at home with the miles and miles of green park. The buildings themselves were covered in green, and not like a decaying city which nature has overtaken.

The whole city was an orderly, vertical garden. It reminded me of the legendary hanging gardens of Babylon – one of the seven wonders of the ancient world. However, it was even more impressive in its size and scale. Ancient Babylon surely had no high-rises.

Singapore – From No Natural Resources to Green Building

I am, of course, describing Singapore, a city-state off the coast of Southern Malaysia. Its gardens are no less impressive than its rise from third-world to first-world in just over 50 years.

In 1965, Singapore gained unwanted independence when it was expelled from Malaysia. At the time, its per-capita income of just $500 was the same as Ghana’s. The country was riddled with slums and had no natural resources.

So how, exactly, did it come to lead the world in home ownership, education, cleanliness, the health and safety of its citizens, technology, and green building?

The answer to that is more multifaceted than we can go into here. However, there are a few things agreed upon by all.

First, Singapore is one of the top 3 ports in the whole world. Most trading vessels would use its port to refuel on their way to Asia. It also quickly became known for its world-class airport. It became safer and more welcoming than almost any Asian airport in the 1960s and 70s.

Western businessmen traveling to other Asian countries could find refuge in Singapore. In addition, the city-state made sure its runways were long enough to accommodate the largest airplanes and planted lush greenery on the roads between its airport and hotels.

The nation made sure to safeguard its first impression on guests. But in order to guard and make profitable its one resource – its location – Singapore needed talented leaders who were willing to get advice from other countries.

Detractors of Singapore’s government have called it a benevolent or enlightened dictatorship, and its citizens, while very well-cared-for, do not enjoy the freedom of the press or other civil liberties the same way as in the West.

However, American citizens have given up their citizenships to become citizens of Singapore, so there must be something else compelling about this society to be worth it.

The Greening of Singapore

What I’m most interested in, is how, in 50 years, Singapore has fed, housed and found jobs for most of its citizens, created peace, built infrastructure, and remained green in all senses of the word.

One hundred percent of Singapore’s population is urbanized and yet it surpasses most countries in the world for green cover, sustainability, and renewable energy. It has actually increased its green cover, in an era when most other tropical rainforests are being cut down to make way for developments.

Singapore went from 36% green cover in the 1980s to almost 50% today. Built into its legislation is the maintenance of green cover on all its land. In fact, Singapore still boasts a stand of biodiverse, virgin rainforest right in the heart of the island.

If you are a developer trying to build new buildings in Singapore, you have to replace any greenery you have displaced. Green roofs, high rise terrace gardens, and cascading vertical greenery are just part of every new skyscraper. Additionally, they add gathering space – which is at a premium in this high-density city. Even Singapore’s public housing development is green. There are seven 50-story buildings connected by gardens on the 26th and 50th floors. There are tracks for jogging and exercise stations on these levels as well.

In order to implement this greening, the Building and Construction Authority has a Green Mark Scheme, or rating system, built into its codes. All new buildings as of 2005 are evaluated based on environmental impact and performance.

One of the most important things to any resident of Singapore is the city’s parks. The Supertrees mentioned at the beginning of this post are part of the 250-acre “Gardens By The Bay” park. The structures collect their own solar energy during the day.  Then, they display a nightly light show. The plants growing on the outside of the structures do indeed provide housing and food for local wildlife.

Singapore is committed to outdoor life for its citizens, even though there is no choice but to live in a high-density urban setting. It is gradually connecting all of its parks into one vast network. The ultimate goal of making 400 miles of walking and cycling paths throughout the city.

Another project, the Beach Road project is a city block structure spanning two skyscrapers. It provides shelter from heat and rain – both of which Singapore’s climate provides in abundance.

The undulating canopy is designed to draw wind through the space to naturally cool its inhabitants but doesn’t stop there. The entire complex integrates solar panels for power, solar tubes for hot water and rainwater harvesting for fresh water.

Most freshwater must be provided to the island via various means, as it has no fresh water source of its own: ocean water desalination, sewage treatment and importing fresh water from Malaysia are Singapore’s only other options. Rainwater harvesting is now standard on all buildings in Singapore.

With access to food, job security, housing at affordable prices, and breathtaking green city-space that acts as a backdrop for peaceful, integrated metropolitan culture, it’s no wonder Singapore has become the world’s leader in so many respects.

Hopefully, with population density on the rise in many of our cities – and cities becoming the most sought-after places to live – more cities in the world will follow Singapore’s example in the future.